The 2016 season in summary
Both our teams finished with winning records (again!) in another successful season. The Badgers finished 6-3 and the Bats finished 5-4, here is a game by game recap.

Game 1, at Plymouth Mariners, baptism of fire for new players Alex, Elliott, Gontzal and James as we faced Plymouth’s best pitcher in the first game of the season! We lost.

Game 2, home v Exeter Spitfires, complete opposite from game 1, 4 Bats had 3 hits each, we had 21 stolen bases.

Game 3, away but in Failand to Newton Abbott, Mike and Paul hit Home Runs.

Game 4, we beat the Badgers.

Game 5, Taunton Muskets pitched a 3 hitter against us. Ouch.

Game 6, Muskets again, Rich had 2 hits and 2 runs, our only highlights.

Game 7, against the Badgers, we only had 4 hits? Pathetic.

Game 8, home v Mariners, Rich dived for a ball, slightly hurt himself, then stopped pitching in the 2nd inning with the bases loaded and no outs. Later we found out he couldn’t play 3rd base either!

Game 9, Taunton Musketoons, Paul’s pitching and his defense on the mound were great, plus we had 4 double plays.

Game 1: Home opener vs. the Muskets – Pete pitched his best game of the season and John Arnold got the only hit – thanks John!

Game 2: Away to the Spitfires, we sure made that game hard work for ourselves but Aaron hit two homeruns and it pushed us across the line.

Game 3: The first Bristol derby – we were comfortably beaten!

Game 4: Musketoons in Taunton – Aaron hit three homeruns, and Rhod his two (maybe one was knocked over the fence by the Taunton Centrefielder).

Game 6: The Mariners travelled to Bristol and were thumped. They said the fence would help them hit homeruns – Tom Hollies struck out 14 batters in 7 innings !

Game 9: 34 walks for the Badgers! We turned the ball over to ‘The Swan’ Nik South to complete his perfect season of playing all 9 positions. 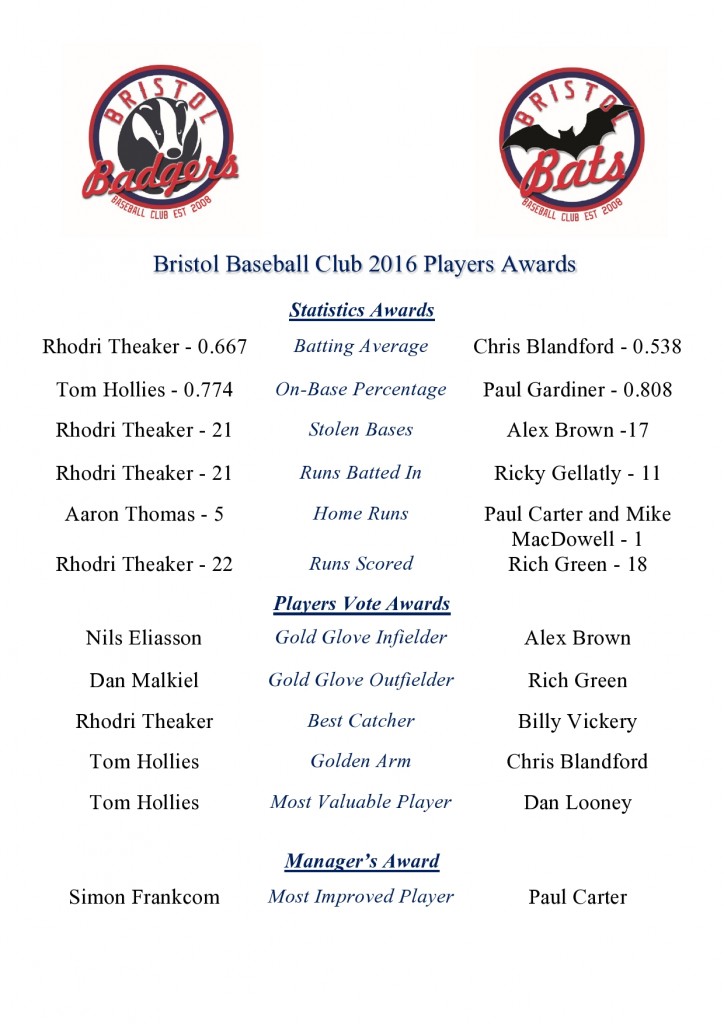 2015 for the Bats started somewhat tumultuously, but they settled into their groove fairly quickly. Opening day versus the Badgers was rained off, then the first game of the season saw a heavy loss at home to the Taunton Muskets. This was followed by a worryingly close game versus their clubmates the Taunton Musketoons, but we scraped through 13-9 in the end.

Reasonably big wins followed away to the Exeter Spitfires and Plymouth Mariners, and the spirit gradually crept back into the team. This was re-enforced with two very enjoyable games against our clubmates the Badgers, just a shame they came out on top in both! The next game was supposed to be the Muskets Re-match but this was another rain-off, which then got rained off repeatedly and in the end the game was never played. We like to think we could have beaten Miguel, but the Musket’s 9-0 final record perhaps suggests otherwise…
The next game was one that will stick in the memory for a long time. Runs were scored in every single half inning right up until the top of the ninth at home to Exeter, who held the lead for most of the game. A shut-out top of the ninth by the Bats set things up for victory in the bottom of the ninth, where Luke Looney tied things up with a three-run shot, Rich Green got on base, stole second, stole third and Billy Vickery brought him in on a fielder’s choice to win the game 21-20! You can see the scoreboard below, it’s a classic!
A better win away to the Musketoons was followed by a disappointing loss at home to Plymouth in the last game of the season. Finishing with a winning record was a great result though at the end of what was an especially bumpy year.
The Bats look strong going into 2016 though, with much of the 2015 team back and ready to go; lots of proven players ready to have an impact and a year’s extra experience under the belts of the relative newcomers. Bring on another year with a winning record! 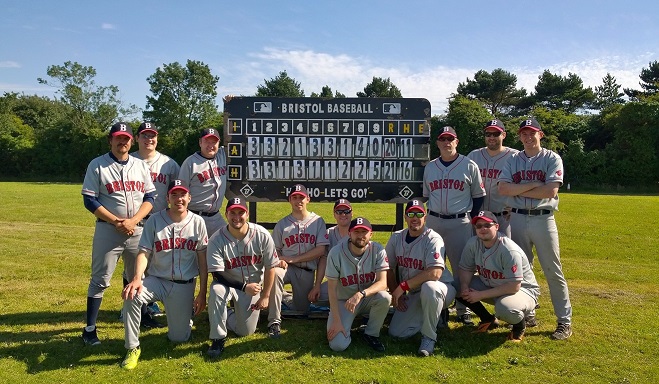 2015 Badgers tbc
2014
Both teams once again finished with winning records, although this time in the same South West Baseball League! The Bats finished tied for 2nd place in the league with a 7-3 record, and the Badgers finished 4th with a 6-4 record. The pre-season started with our annual introduction sessions and indoor training practices. This was publicised with media coverage and posters distributed by players and it resulted in several new players joining our club. We also held 2 scoring clinics prior to the start of the season which helped hugely as the season unfolded.
It became clear early on that we could not sustain a team in the BBF leagues due to the travel distances and our practice requirements. When we were in the AAA league we hugely enjoyed the doubleheaders but we typically left Bristol by 8am and returned at 6pm or later, so we asked the SWBL if we could take the unusual step of having 2 teams in the same league. Thankfully they agreed and hopefully this will happen with other clubs in the league in the future. We play single 9 inning games and our reduced travel time in the SWBL has made a huge difference to many players and their families yet we still play baseball at a highly competitive level.
Practices were held every Thursday evening and Saturday morning and players played in games if they came to 2 practices per month. Some highlights during the season include the Bats team fielders making 3 double plays in one game and a triple play in another; the Badgers beat the league winners and beat Taunton (who tied for 2nd place); and both teams continued our family traditions as David and Sean Matthews played for the Bats while Andy and Harry Vaughan played for the Badgers making it our 7th family playing together over the years. 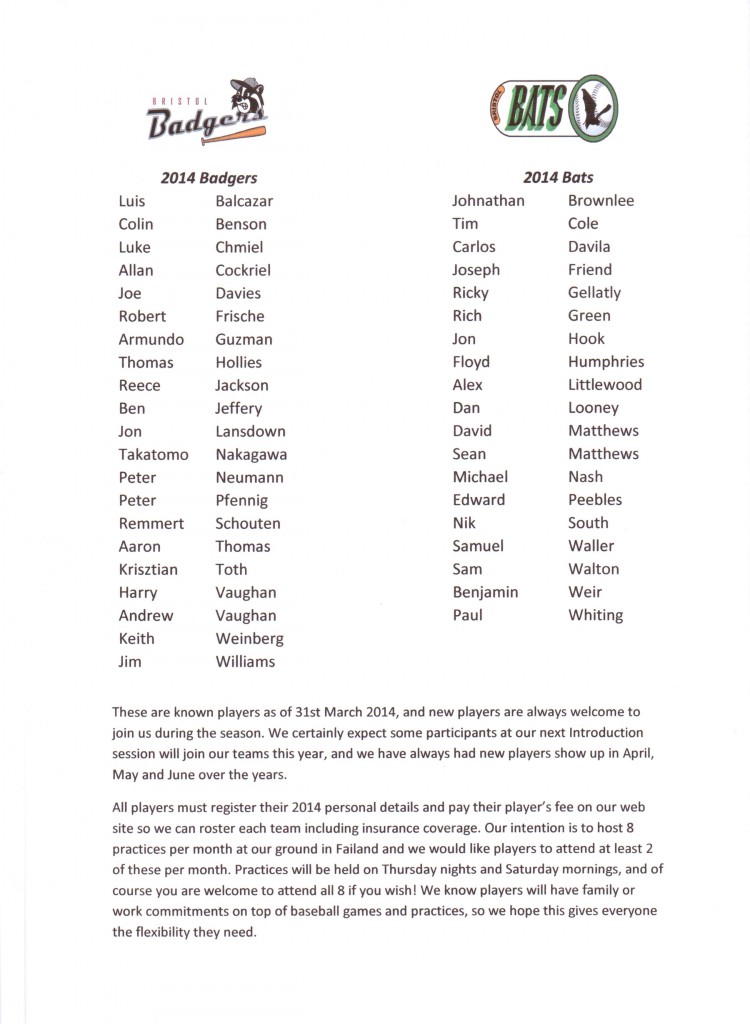 Player numbers over the years 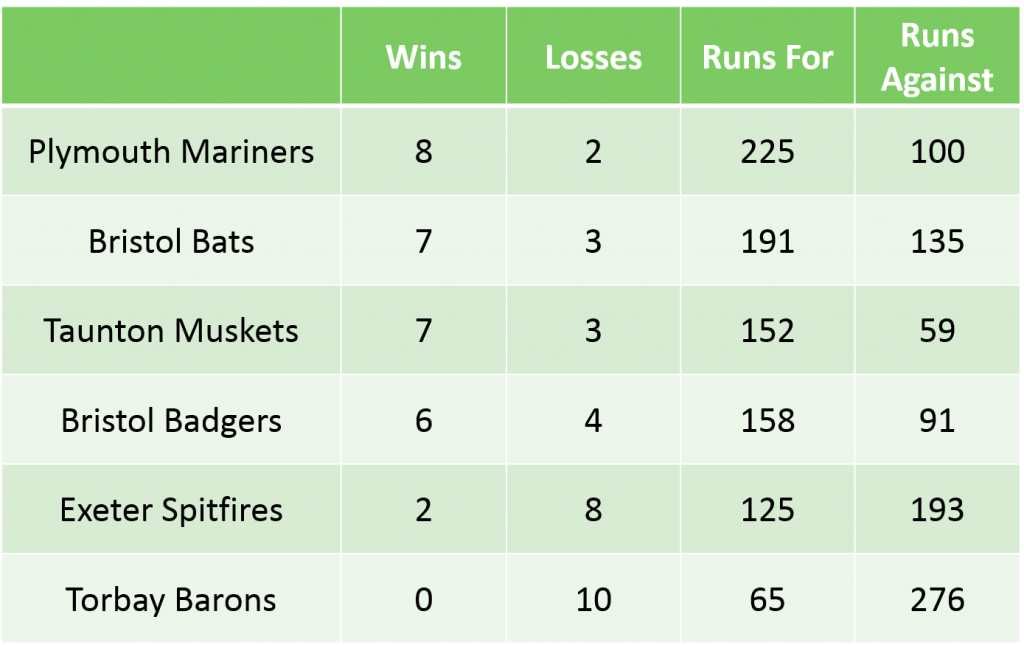 2013
Both our teams finished with winning records in 2013, and we rostered more players than any previous year as we continue to grow as a club. The Badgers finished tied for 4th place and only missed out on the playoffs by run differential, and the Bats finished in 2nd place in the independent South West Baseball League. 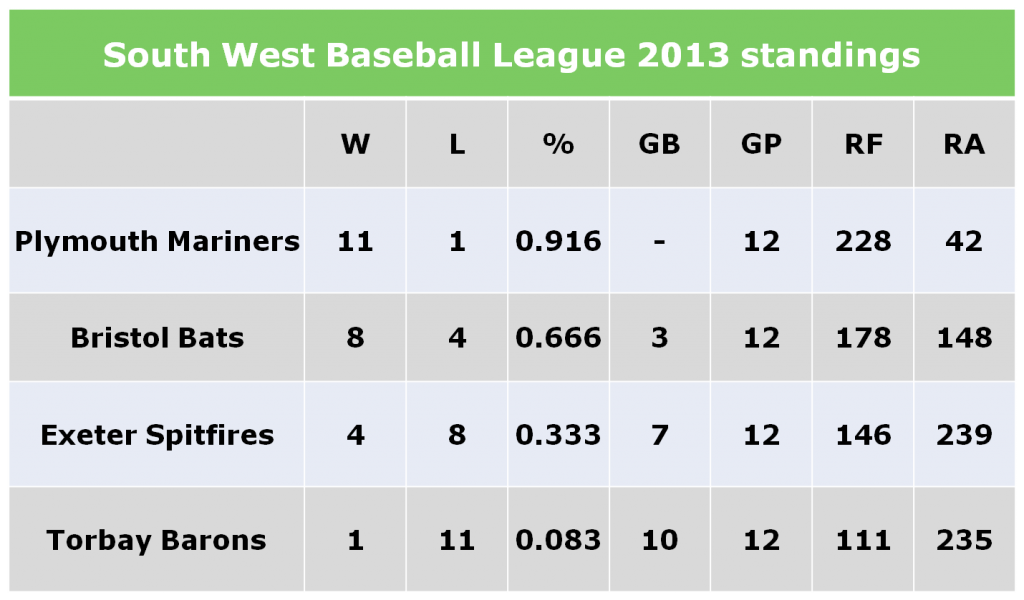 The Badgers had fantastic pitching throughout the season and this was reflected in the “runs against” column, their fewest in any season thus far. The Bats had contributions from experienced and first year players as they were able to pitch 7 different players over the course of the season. The 2013 Annual Awards summary is below. 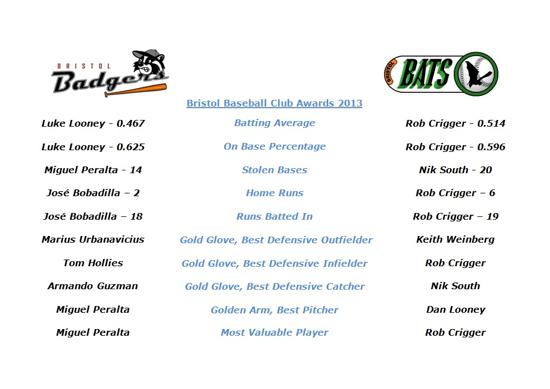 2012
The Badgers finished the season tied for first with Oxford, and the Bats played in the inaugural season for the Southwest League. The Southwest League is a group of independent teams including Plymouth, Torbay and Exeter, who are trying to grow baseball in our region. 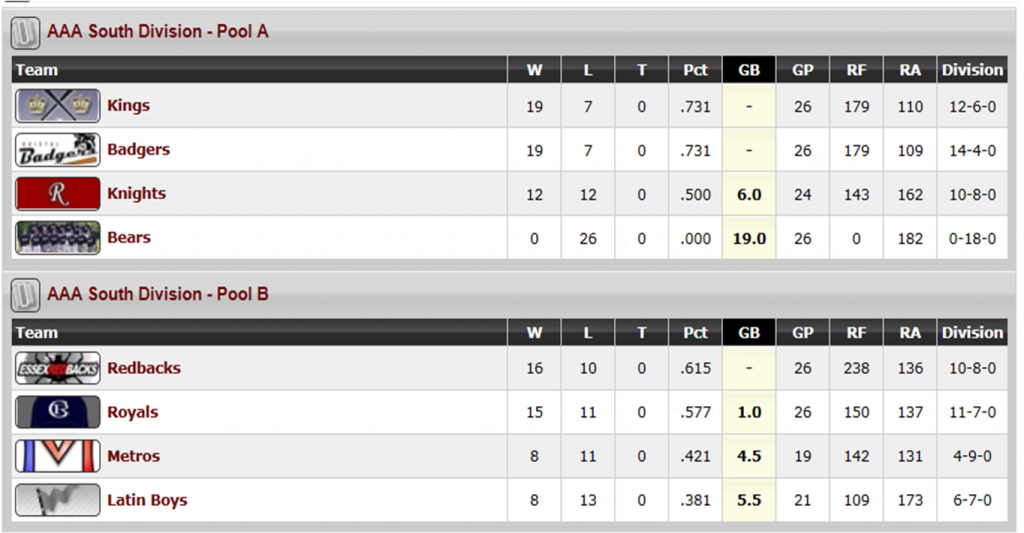 The pre-season saw our normal recruitment drive including distribution of leaflets to hundreds of local businesses. We handed out leaflets at the showing of “Moneyball”, we featured on television and radio, and we were fortunate enough to meet and recruit “The Hoff”!
Another successful indoor training season soon turned to Opening Day. Our Badgers home opener was the 15th April and we celebrated Jackie Robinson day in style, including Jackie Robinson #42 cupcakes. The Bats team opened their season on 22nd Apirl in the Southwest League.
The Badgers had great pitching and amazing defense as they turned double plays in many of their games. This held the opposition to just 109 runs over a 26 game season, our best ever defense. At the plate we had home run hitters in Aaron Thomas, Gian Jimenez, Luke Looney, Johnathan Brownlee and José Bobadilla. Gian and Luke went on to represent Great Britain at their respective age levels. Our penultimate game of the season was at Oxford when we were tied with them in the standings. The first game of the doubleheader went into extra innings with the score tied 0-0! We won that game, lost the second, and finished tied with Oxford on the season.
The Bats also had their home run hitters. James Smith clobbered one on his first ever at-bat, followed up with 3 more on the season, and Ricky Gellatly also cleared the fences. On the 9th September Miguel Peralta pitched a no-hitter to finish the season on a high and give us great optimism heading to 2013.
In September we also held our Annual Club Awards Evening to recognise our team and individual achievements. We now have awards for both our teams in statistical and voting categories, and once again it proved to be a memorable evening.
See this link for the Badgers 2012: http://www.britishbaseball.org/page/show/472242?subseason=67704
See this link for the Bats 2012: http://www.britishbaseball.org/page/show/479528?subseason=68421 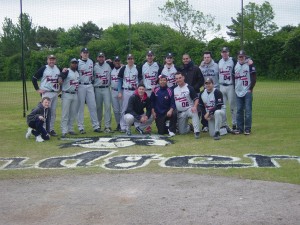 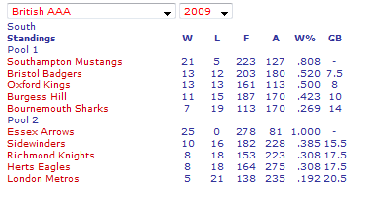 This included our opening home game which attracted local radio publicity, complete with barbeque and a healthy amount of spectators. Our split doubleheader trend continued into the summer but in mid-season we slumped and lost a couple of close doubleheaders. Team spirit was not diminished and we rallied toward the end of the season to finish with a winning record at 13-12. This was good enough to finish in third place in the British AAA standings. We were pleased to see an improvement on our first full season in 2008 and it bodes well for 2010 as we build on getting baseball re-established in Bristol.
The Bats, our independent team, were also able to play several quality matches giving our less experienced or younger players an opportunity for growth. This included a split home-and-home series with Plymouth. They also travelled to London and had the privilege of participating in the Old Timers Tournament. Playing teams such as the Old Timers and the Italian visitors on the day was a great way to keep the spirit of baseball alive. It was also a great way to give thanks to many of those who founded baseball in the UK.
Photos of the Badgers and Bats 2009 seasons can be found in our photo gallery. 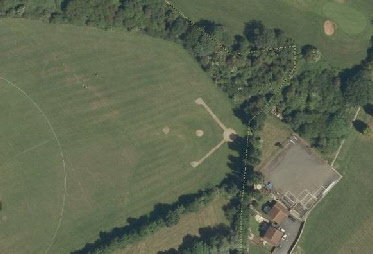 In February work started on building the field at the Southmead Community Sports Club (seen to the right).

Training started in March with the inaugural game against Southampton Mustangs in April. The first league game on the field was  against the Oxford Kings, with a wet backstop and mound which gave us more work to do on the field. On June 8th the Badgers claim their first win in the AAA league against Burgess Hill (18-6). In July, our first website was created.